2023 Housing Forecast: What to Expect With Rates, Prices, and the Economy 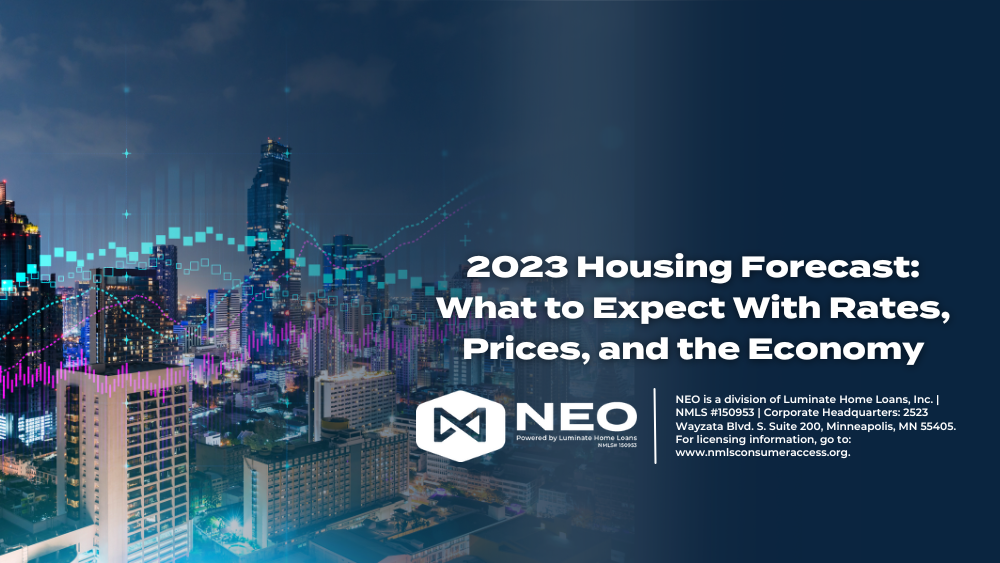 The U.S. housing market in 2022 was a rollercoaster. The year started with home prices at record highs and interest rates still closely holding the all-time lows that were set over the previous two years.

This all changed in the summer of 2022 when rates began to tick up to the highest they had been in almost two decades. This combined with high home prices to throttle affordability for many buyers.

At the end of the year, we saw demand drop, supply increase, and appreciation levels moderate to a more normal level. We also saw interest rates decline as the inflation rate came down.

But will that continue as we move into 2023? And if it does, will more homebuyers enter the market? How will that increased demand impact home values?

To help with this analysis, we turned to Barry Habib, CEO of MBS Highway and one of our favorite resources for forecasting the mortgage and financial markets. The data below is pulled from his 2023 Housing and Interest Rate Forecast.

Rates will continue to respond to inflation

Supply and demand play a vital role in the housing market, and one of the biggest factors impacting demand at the start of 2023 is interest rates.

As mortgage rates rose in the second half of 2022, we saw demand for housing decrease significantly. But in the last few weeks of the year, rates showed signs of meaningful improvement as inflation started to come down. We anticipate this trajectory to continue as we move further into 2023.

As we’ve written about before, any long-term interest rate is going to be driven by inflation. Why is that? Because inflation erodes the profits that investors realize from the fixed payments they are receiving on long-term bonds like mortgage-backed securities (or “mortgage bonds”).

To make mortgage bonds profitable for investors during inflationary times, bond issuers need to offer higher rates of return – which means the interest rate on your mortgage needs to go up.

But look at the gray bar showing the COVID-19 recession. It was during this time that the Federal Reserve bought a lot of mortgage bonds in their attempt to stimulate the economy. This was called quantitative easing.

During that period of quantitative easing, mortgage rates remained right around 3%. But as inflation started to rise from very low levels, mortgage rates didn’t respond like they usually do thanks to the Fed’s continuous buying of mortgage bonds. Once they stopped buying these bonds, rates started to creep up and follow inflation again.

Mortgage rates have fallen recently in response to inflation, but they are still significantly higher than they were even before the pandemic. For rates to further their decline, inflation will need to continue improving.

Where is inflation heading?

To forecast where inflation is heading, we look at the Core Consumer Price Index (CPI) which measures the average change over time in prices paid by consumers. “Core” means that these readings do not consider food and energy costs because they are not affected by monetary policy. 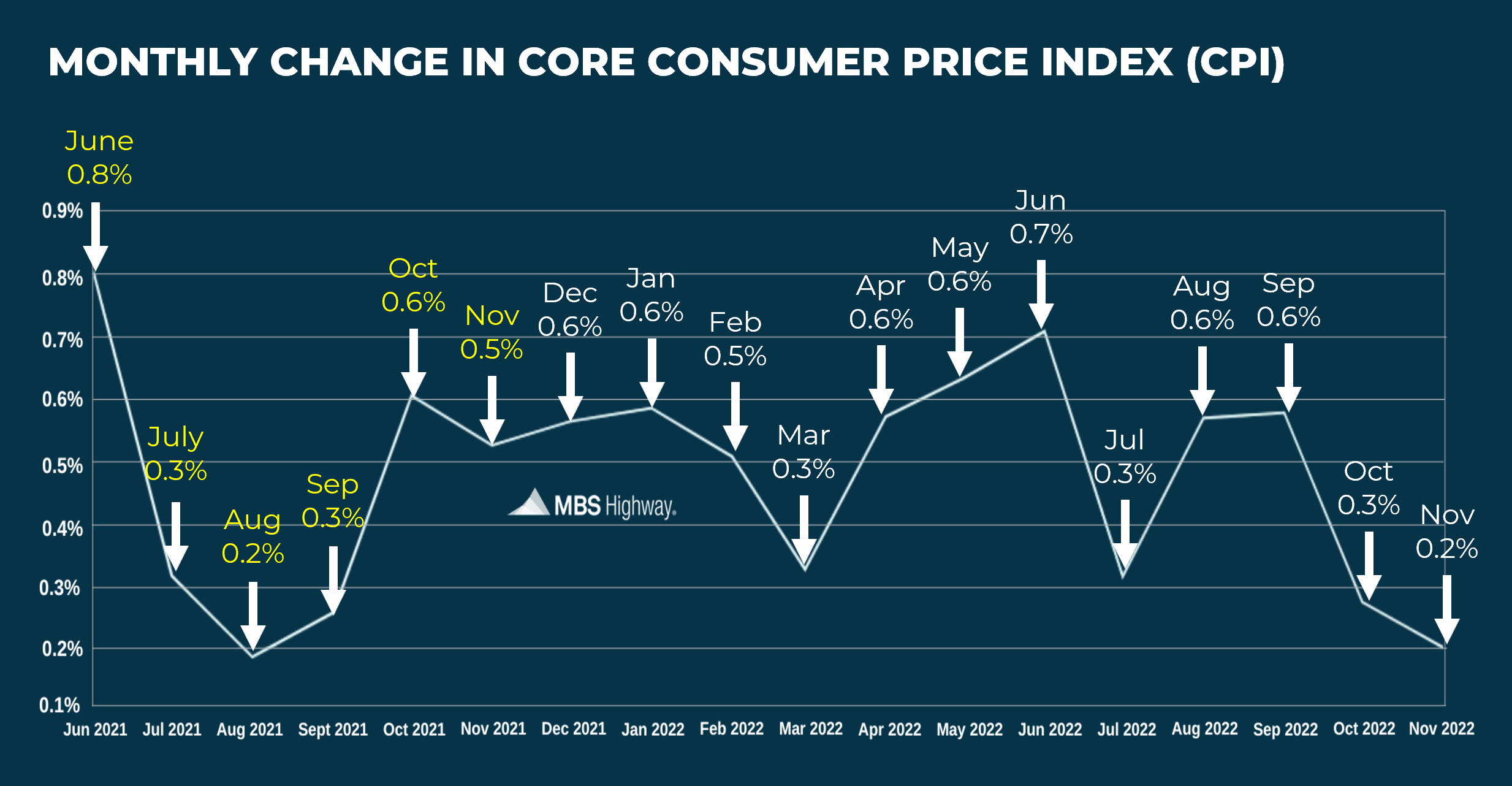 The most recent core CPI numbers for November 2022 show inflation at 6% year-over-year, which is 0.2% less than October’s reading. As low CPI numbers continue to replace the high numbers we saw in the first half of 2022, that will be a sign that inflation is decreasing which will help mortgage rates continue their decline.

Shelter costs will have a big impact on inflation

Not only do we anticipate inflation to continue its decline, but we also believe it will decline at an even faster rate as we move further into 2023. This is because of the role that shelter costs play in the CPI calculation. 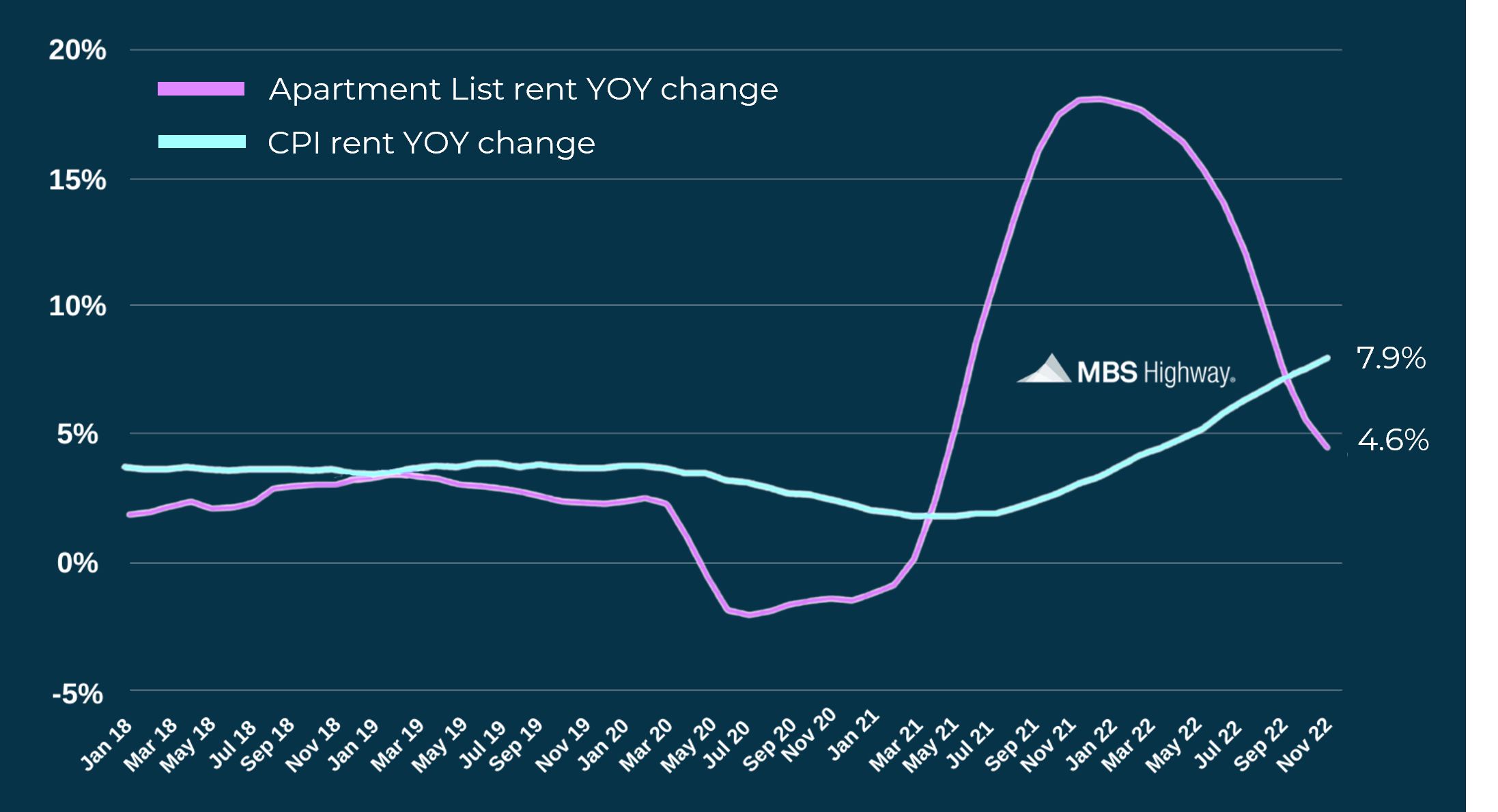 Shelter costs make up 39% of the core CPI, and we have been seeing them come down rather significantly lately (the purple line in the graph above). However, it takes some time for these decreases to accurately reflect in the CPI calculation (blue line) because of how long it takes for home leases to roll over into new contracts.

This lag effect is keeping the total CPI elevated. But as we go forward, the readings will begin to factor in the real-time decreases in shelter costs that happened at the beginning of 2022. This will eventually have a significant effect on bringing down reported inflation and help mortgage rates drop even further.

Rates will drop even further as we enter a recession

More good news for mortgage rates is the fact that we are on the brink of (or already in) a recession.

We know this is good news for rates by looking at how they have responded during previous recessions. As you can see in the graph below, mortgage rates have decreased either during or immediately following each of the last six U.S. recessions. 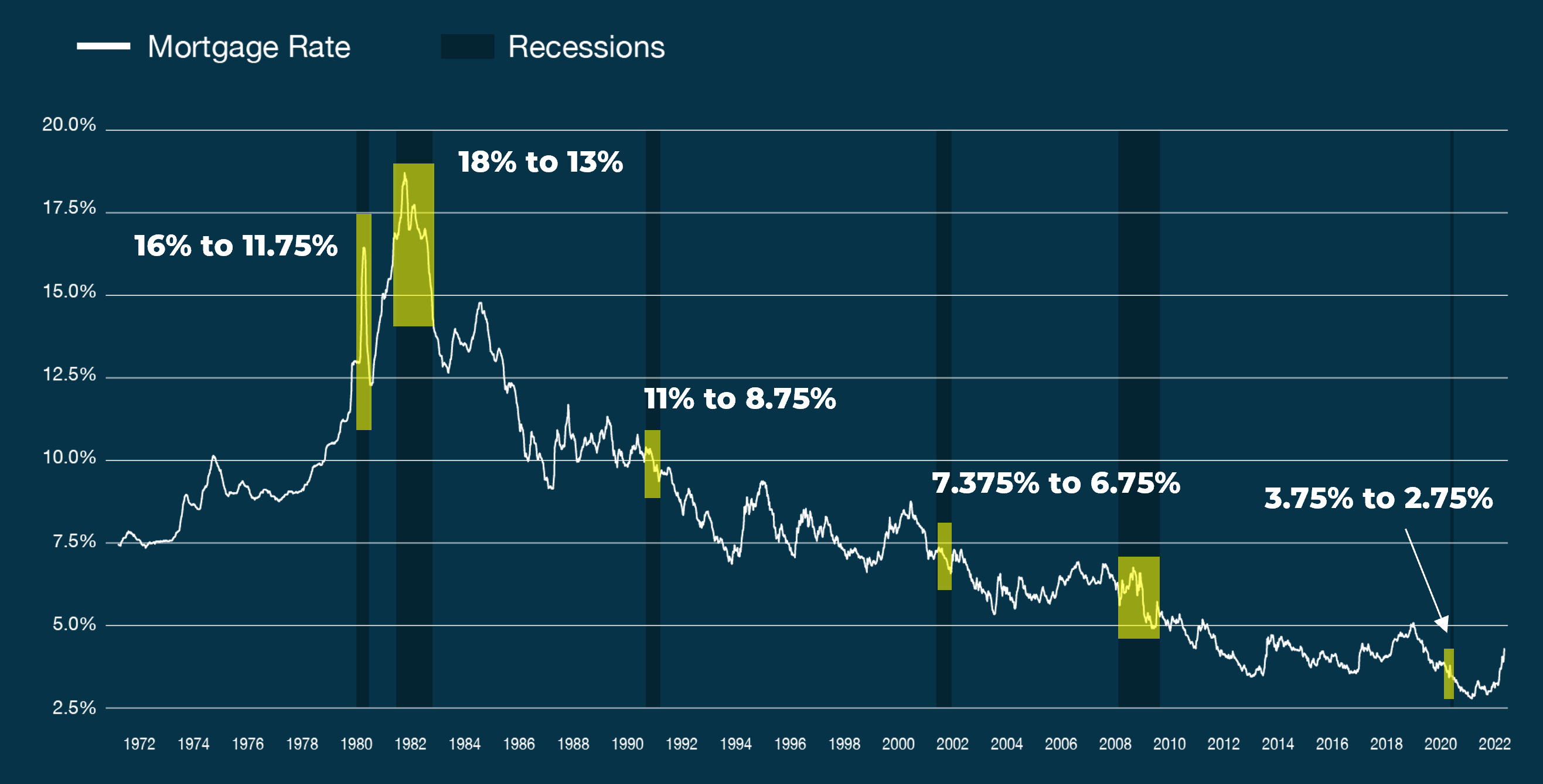 But how do we know that a recession is imminent? There are two big indicators:

1. Consumers are running out of money

We have been heading toward a recession for quite some time, but it has been staved off because American consumers have not changed their spending habits even with prices rising. 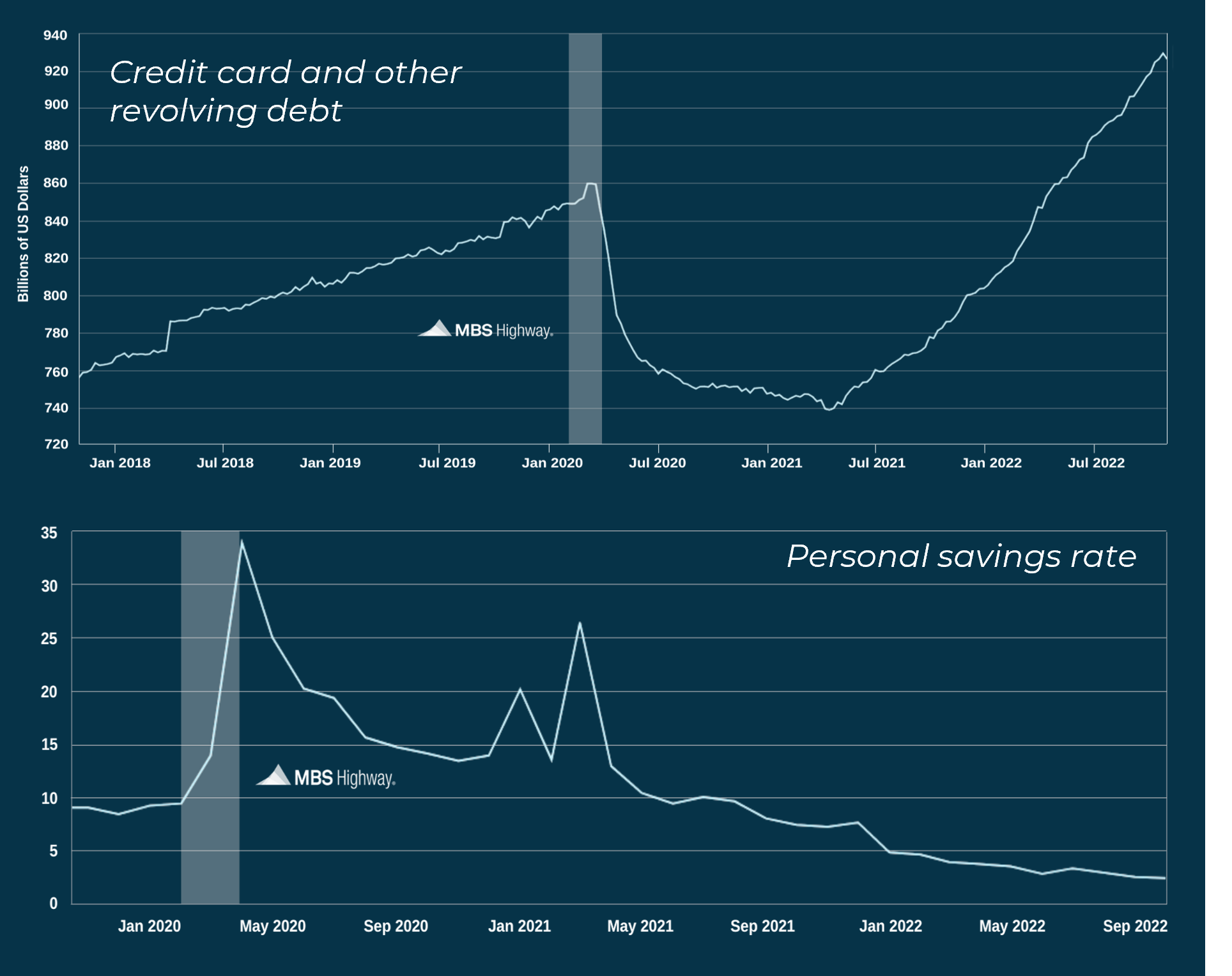 You can see that credit card debt dropped significantly during the first year of COVID thanks to government stimulus and less discretionary spending because of lockdowns. But now that everything has returned to normal, credit card debt has skyrocketed much higher than it was before the pandemic.

The personal savings rate has done the opposite. Americans were saving their stimulus and extra money in 2020 while they were stuck at home, but they have been tapping back into it significantly over the last two years.

The ability for people to use credit cards and spend their savings has an expiration date. Once those wells are tapped, the economy will slow down quickly, and a recession will become imminent.

Another way we can predict a recession is by looking at the difference between the 10-Year Treasury yield and the 3-Month Treasury yield.

Longer maturities, like the 10-Year Treasury, are supposed to have a higher rate of return than their short-term counterparts. However, there have been times in the past when the 3-Month Treasury Yield was higher than the 10-Year Treasury yield. An inverted yield curve is when the difference between the two drops into the negative.

The gray bars in the graph above show U.S. recessions. As you can see, every time the yield curve has inverted, a recession has immediately followed – and the yield curve is very much inverted here at the start of 2023. We take this to mean a recession is at our doorstep.

Even though lower interest rates will make housing more affordable, many Americans might be hesitant to invest in real estate for fear that their home values will drop when the economy slows down.

This is because, when it comes to homes values and recessions, most people are immediately transported back to the Great Recession in 2008 when home prices plummeted across the country. However, what they do not realize is that the reason home prices fell so drastically then is because that recession was caused by the housing market collapse. 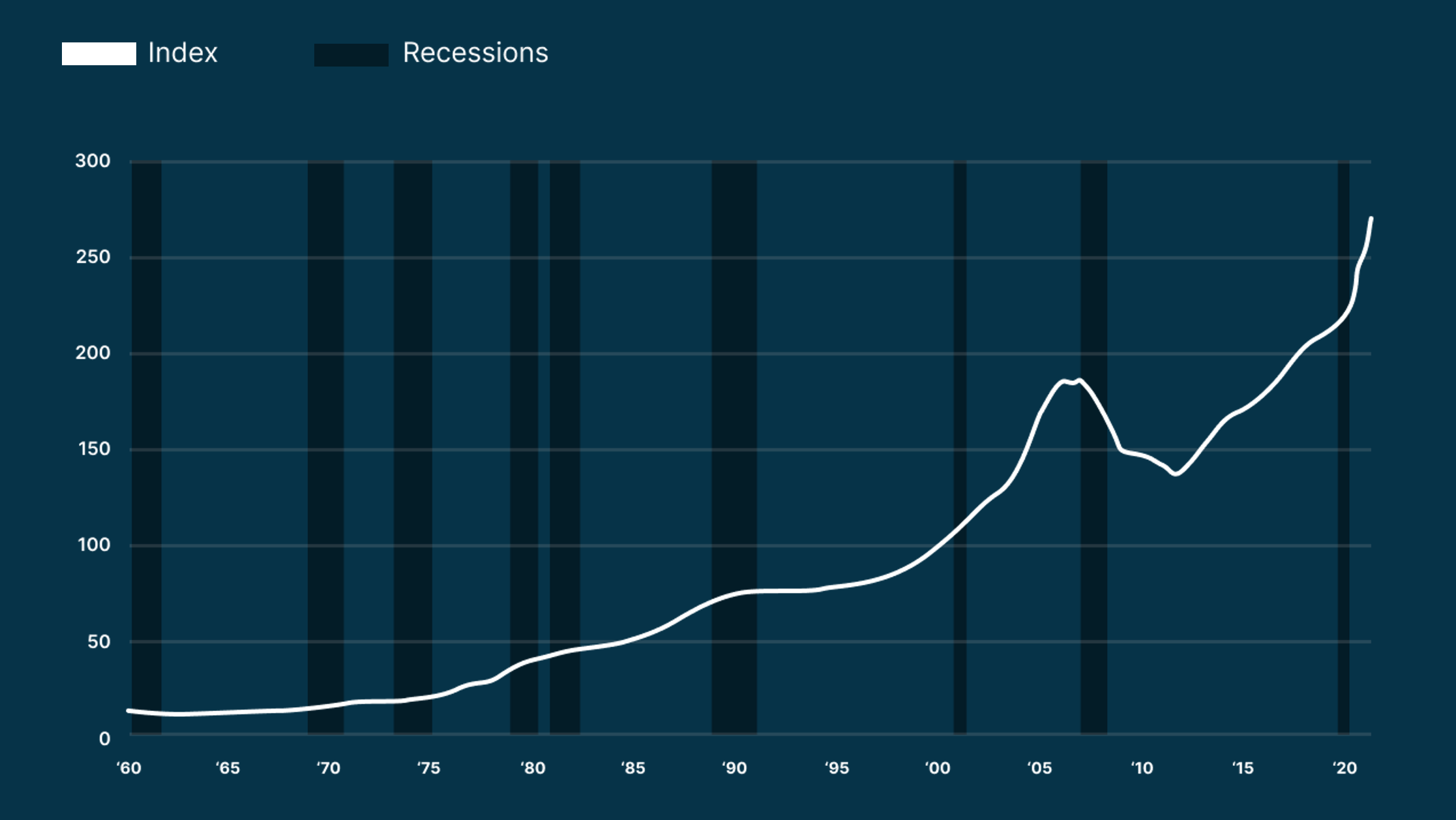 If you look back at the last six recessions, the Great Recession was the only one that had a negative impact on housing. In fact, home values have either stayed stagnant or increase during and immediately following a recession.

It’s also important to understand just how much prices have risen lately. Yes, appreciation slowed at the end of 2022 and even went down in some areas. But if you consider how high prices have risen in the last few years, it’s clear that this moderation is hardly a cause for panic about another market crash.

In the last 10 years, home prices have increased 115%, and they have gone up 39% in the last two years alone. Even in an environment with interest rates at 7%, we have only seen prices come down slightly by 2.5%.

People WANT to buy homes! They are just waiting for a bit until homeownership becomes more affordable. When interest rates come down and demand outpaces supply, things will change.

Housing demand has been down while rates have been high, but there is still no shortage of eager buyers waiting to jump into homeownership. They are just waiting until housing becomes more affordable.

Demand for homes is measured in “households”. Households are formed when adults move away from their families and occupy additional homes. For the past several years this has been happening at a rate of about 1.7 million new households per year.

But as we saw mortgage rates get to over 7%, some of the people that were going to form households went into hibernation waiting for rates to come down. Consequently, the number of new households has dropped to about 1.4 million annually as we start 2023.

But that demand is not gone forever – it is just waiting to be unleashed when rates drop. And when that happens, we will not have the necessary supply of homes to meet it.

What’s more, new households have been significantly outpacing new home completions since 2017. And while builders have slowed things down a bit as affordability has suppressed demand (they learned their lesson from 2006-2009), that demand will eventually bounce back, and the builders will be even further behind. This widening gap between buyers and homes for sale will be more than enough to support home prices in 2023.

We know that there is plenty of demand for homes, but one important factor that we need to address is home affordability. There may be millions of Americans who WANT to buy a home, but what good does that do for the housing market if they can’t afford it?

Home affordability is based on two things: monthly mortgage payment and monthly income of the buyer. Let’s look at what this affordability was in the last two years and compare it to what we anticipate it to be in 2023.

But even though mortgage payments and other costs increased, average incomes went up as well. According to ADP, incomes of Americans who remained at their jobs increased by 7.3% in 2022, and incomes of those who switched jobs increased by 15.2%. If we average this to a 9% increase across the board, a $9,000 household income increased by $810 in 2022 – not enough to cover the $1,154 increased monthly costs. No wonder people were so hesitant to buy homes last year!

The tables are turning as we enter 2023, however. We expect interest rates to drop to around 5% in the first half of the year. If price appreciation remains stagnant, that mortgage will remain at $440,000, but the monthly payment will go down to $2,362 – only an $807 increase from 2021.

As we enter 2023, we expect interest rates to drop closer to 5% thanks to continued decreases in inflation and an economic slowdown.

These lower rates – combined with higher incomes and the desire to avoid increasing rent prices – will bring even more buyers to the market. Demand will continue to overwhelm supply, and we believe we will see low-single digit appreciation throughout the year. We are confident that the housing market will remain steady in 2023 and beyond, and that real estate will continue to be a safe investment and a great way to build wealth.

If you would like to know if homeownership is a possibility for you this year, fill out the form to request some more information from one of our mortgage advisors. They will be able to answer all your questions about the state of the housing market, and help you put together a plan to get a great deal on a home and start building wealth through home equity when the time is right. 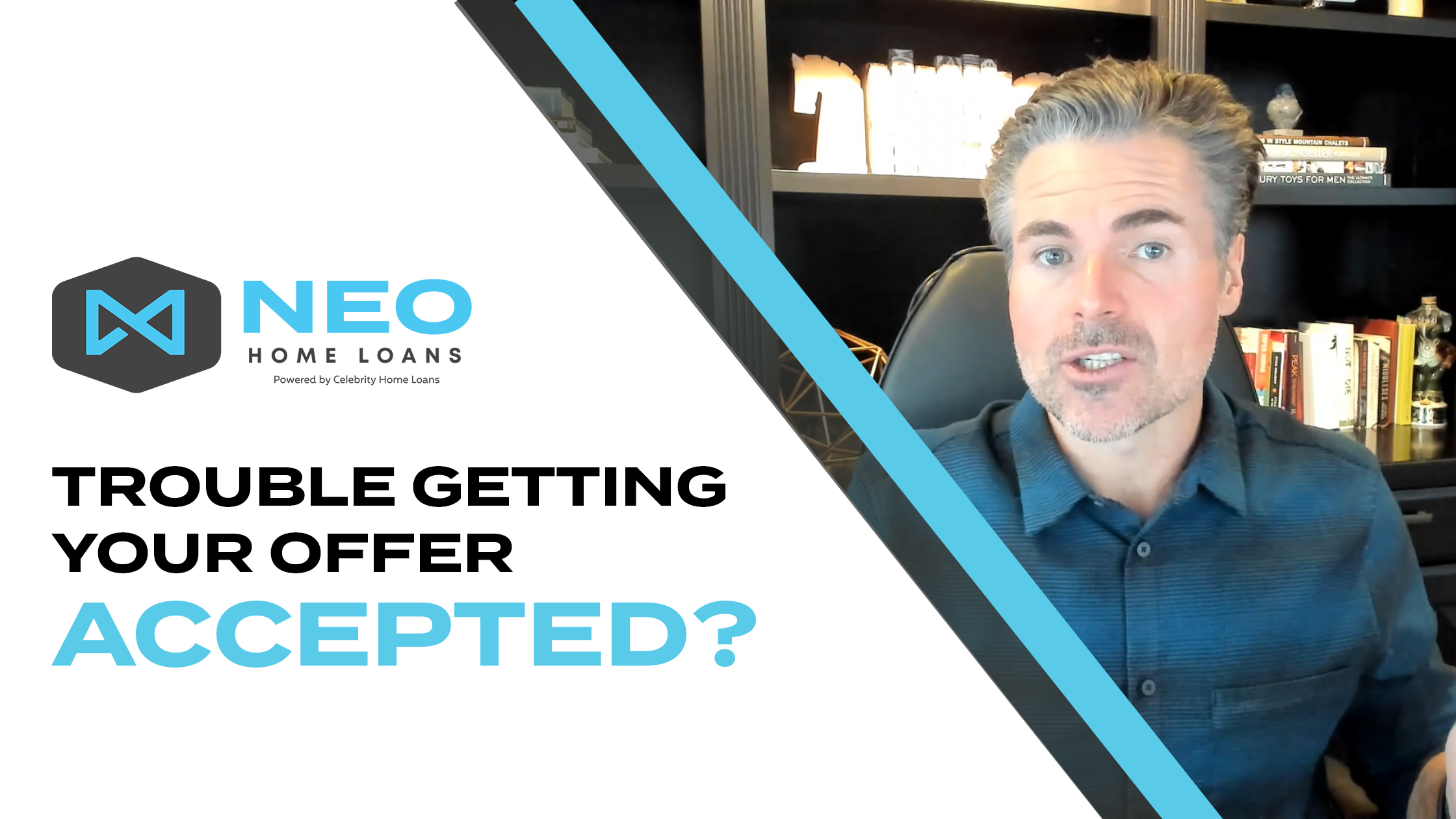 How to Get Your Real Estate Offer Accepted in 2021 (Three Strategies That WORK!) 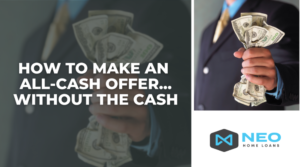 How To Make An All-Cash Offer…Without The Cash 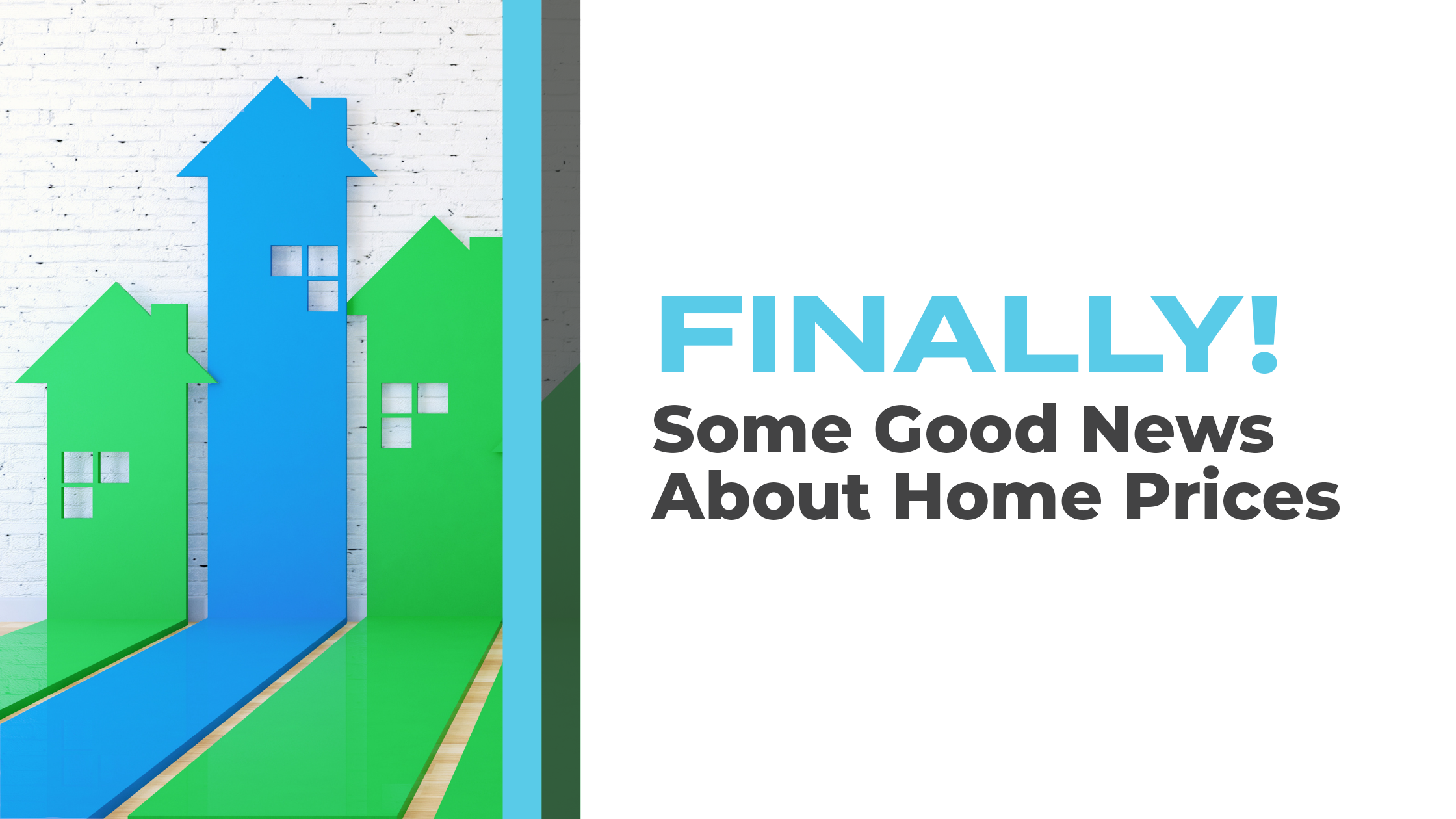